The picture on the right is of an orchid my dad gave me for my 33rd birthday back in 2012. It bloomed once and then dried out. I’d kept the plant, despite its withered appearance and watered it (rarely) thinking that one day it might come back to life and grow flowers again. I was on the verge of throwing it away, when I had the idea of seeing it in my mind’s eye blooming beautiful orchids once again. Sure enough, two years after it had shown any sign of life, it’s now flowering and I feel that this is a huge correlation to the story that follows…

If you’ve ever had a miscarriage you’ll know how easy it is to blame yourself and wonder whether or not it is something you did that caused the loss. Just like my orchid, you’ll wonder if you have the right environment for new life to grow. What I know now is that it's a delay and not a denial and that everything has a Divine plan.

If you’ve followed my story you’ll know that I’ve had 6 miscarriages in total, five of them happening in a 12 month period. I’m really toying with the idea of writing a book about the whole experience because I have honestly learned so much. Just as there is more than one way to skin a cat (such a horrible saying), so too are the various ways you can experience a miscarriage.

I literally had hundreds of different women (and a few men) writing to me with ideas (and some concerns) about what I should be eating, drinking, thinking and contemplating. I had help from healers, shaman, witches and mother nature experts all over the world. I consumed green juices, purchased expensive herbs and lotions and looked for signs that my soul baby was ready to finally come through.

Each loss was different and yet the feeling of failure would worsen. Honestly, 2014 has been one of the hardest and shittiest years of my life. However, it's also been one of the best. Go figure.

In June, my husband and I decided to move to the beach (Noosa) to reclaim some presence that had been sorely lacking from our time in Melbourne. We knew a fresh start would be the best thing in order to take a break from ‘trying’ to make a baby. Our souls needed to re-set, recalibrate and figure out a way to move forward somehow. The agony of loss after loss had made our first year of marriage strengthen our love, but wilt our exuberance. 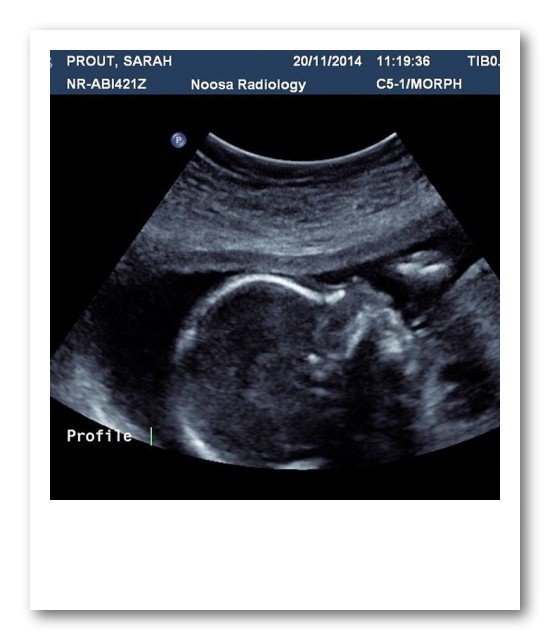 This is a scan of Little Miss Prout-Simpson measuring 22 weeks and 2 days. We have chosen a beautiful name for her that we can't wait to share in just 16 or so weeks.

Within 10 days of living by the ocean I fell pregnant with the daughter I am due to give birth to in March 2015. Our prayers were answered.

Before we moved states, I had seen so many doctors and specialists at the Recurring Miscarriage Clinic in Melbourne. However, it was when I found a local GP here on the Sunshine Coast that asked if I had ever been tested for the gene mutation called MTHFR that I knew I was on the right track. However, by the time I found her I was already pregnant, and if I had heard the results of my test before I fell pregnant then I probably would have given up all hope and stopped trying. You see, the statistics were pretty bad odds and after all of the losses I just wouldn't have been strong enough to face it all again.

Luckily early intervention with super-dooper doses of vitamins and regular shots of B12 helped me to get over each scary milestone. In theory, this pregnancy is a miracle. With my age (35) and my genes working against me, it seemed unlikely that we would see a healthy result. Early on I experienced bleeding, but after 3 solid months of morning sickness I knew that this baby was growing.

MTHFR research is so new that not many doctors know that it can be the culprit for fertility issues such as a recurrent miscarriage.

There are things you can do to manage MTHFR such as having a special diet and other things to avoid, but that's a blog post for another day, or perhaps a book.

On the flip-side of this baby making coin, however, I need to acknowledge the inner work that needed to be done in order to allow the baby to grow and stay with me.

I really feel that cultivating worthiness and letting go of pain from the past is imperative in order to move forward. Just like seeing the orchid grow flowers again, I held the intention that Sean and I were destined to make a baby.

For me, I made peace with the fact that I already had two beautiful children that made it into the world despite my mutant genes. I was thrilled to know that this is probably the reason I miscarried at 16 weeks when I was just 20 years old. It also explains why it took me nearly 4 years to fall pregnant with my daughter.

I truly believe that with a combination of understanding the physical aspects of our bodies and cherishing and understanding the metaphysical side to ourselves that it is the key to unlocking rich and fulfilling outcomes no matter what they might be.

The biggest lesson was the power of becoming comfortable with uncertainty and letting go of the outcome. If anything, MTHFR is in my awareness to remind me to take better care of myself.

If you'd like to know more about MTHFR please visit here. Alternatively, if you've suffered a miscarriage and need support please visit SANDS.